Westerly's Wilcox Park was designed by a former associate of Frederick Law Olmstead in the early 20th century, and it is truly a beautiful space with many activities during the summer. One of those activities is a walkaround to view the Wilcox Park Champion Trees on second Saturdays, May through October. 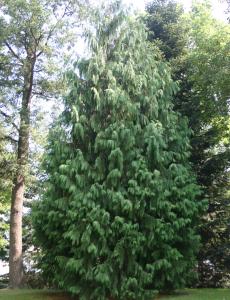 According to the park's history page, a few standout trees were planted in the center, open meadow, so that they'd grow separately from any other tree. Well, they were planted around 1898, so you can imagine they are pretty special after about 120 years. Nine trees in the park are Champion Trees, the largest trees of their species in RI. Several other trees are runners-up. The RI Tree Council keeps a list of very large trees throughout the state.

There are many other plantings to enjoy in the native and perennial gardens. Tours of the native gardens are on the 4th Saturdays, May through October.

The second Saturday of July is coming up this weekend. URI Master Gardeners lead the tours, 10am - 11:30.

Westerly's Wilcox Park was the subject of an early ProvGardener post in 2006, when it had been nominated as a "Great Public Space." I'm not sure if it won that title, but it sure is one of Rhode Island's great public places anyway. The American Society of Landscape Architects named it as one of two RI Medallion Parks. (The other is Roger Williams Park in Providence). It's been on the National Register of Historic Places since 2004.

Where is my picnic basket?