A new Liberty Tree, grown from a seed of the last surviving original tree, a grand tulip poplar that lived more than 400 years in Maryland, was planted on April 27, 2007 at the Roger Williams National Memorial on North Main Street in Providence, RI. It's just down the road from the site of Rhode Island's original Liberty Tree, an elm chosen by the Sons of Liberty in 1768 that stood on the north side of Olney Street and North Main. The RI Department of Environmental Management posted a press release with details of the 2007 Arbor Day ceremony, including the list of that year's nine winners of $30,000 in America the Beautiful grants. An excerpt:

"The Roger Williams National Memorial, a unit of the National Park Service, was selected as the site to receive this historic Liberty Tree due to Roger Williams' nationally significant story of liberty of conscience and its connection to the founding of the principles of freedom in the United States. The memorial's close proximity to the location of the original Rhode Island Liberty Tree, and the protection its landscape provides, will allow the tree to flourish in scale and stature."

Part of the last liberty tree lives on in other ways as well. A 2002 article, "The Sweet Sound of Liberty," in American Forests magazine led me to the story of how Taylor guitars are made from Maryland's liberty tree.

The photos of the tree were taken in April 2007 and August 23, 2017. The plaque in the third photo describing the tree has gone missing, but at least they left the tree. Here is the inscription:

This tulip poplar was grown from the seed of the last survivor of the original 13 Liberty Trees. That historic tree was located on the grounds of St. Joh's College in Annapolis, Maryland. There, it endured for centuries before succumbing to Hurricane Floyd in 1999.

The history of Liberty Trees begins before the American Revolution when each original colony chose a tree to meet under and rally for independence. These trees became a living testament to the spirit and determination of the American colonists.

In celebration of the spirit of liberty, this tree is dedicated to all citizens of the State of Rhode Island. 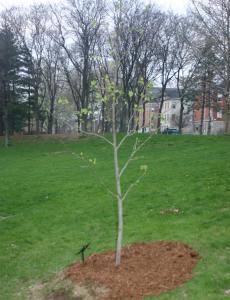 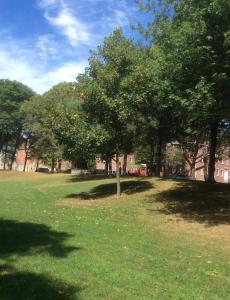 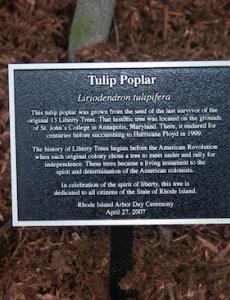